A letter written by our chair Dr Jo Macrae was published in the Camden New Journal. It discusses the struggles that schools will face this Winter due to soaring energy costs and highlights the work that Power Up North London (PUNL) is doing to help.

PUNL is working with schools to increase their energy efficiency, both through installing solar arrays and supporting them to reduce energy use.  Our work has shown that schools can achieve significant reductions in their energy bills and emissions through simple changes in behaviour.

In a profile on PUNL on page 13 of the Camden New Journal, chair Jo Macrae was interviewed.

Another project covered is energy efficiency in schools and using low-cost measures. “We can save around 15% of energy use by some very doable changes to behaviour. Do that top every school in London, and it adds up.”

Jo says PUNL is after the mid-range sites – between micro sites on individual roofs and big installations which need capital. She said it was important to mobilise community support.

She said: “The hard bits, transport, retrofitting, houses and food – each of these things will require radical changes in our behaviour. PUNL is a way of beginning these conversations. We want to help people start their journey to becoming carbon neutral.”

PUNL has developed a Roadmap Report showing how community energy can help achieve Islington’s plan to be zero carbon by 2030 led by PUNL director Tanuja Pandit.

One of the conclusions is: “there are two main areas of community energy activity prevalent in cities: community financed, or grant financed renewable energy generation and energy efficiency/fuel poverty alleviation work.

CEGs can deliver demonstration projects for rooftop solar, renewable heat and retrofitting of community buildings and access low-cost funding.  Their connection to local people is a key asset in gaining public support, encouraging behaviour change and providing energy related advice to the neediest.

But they currently lack scale, and their resources are thinly spread. Islington Council therefore has a key role to play in harnessing these resources by coordinating and facilitating such groups and by providing them with resources.

In Section 1, this report sets out the context for community energy groups’ involvement in reducing carbon emissions and how they can contribute in the context of the Council’s Zero Carbon Report; Section 2 sets out how community groups can contribute, and the information and tools needed to scale-up their efforts; Section 3 describes alternative sources of finance and Section 4 lays out the way forward for delivering the recommendations in this report.

The council has now set up eight work streams for delivering the priorities in their Zero Carbon Plan.
The roadmap presented in the report and developed by PUNL builds on five of the Vision 2030 Work Streams by proposing specific programmes to be delivered to local communities in the short and long-term.  It sets out the “what” and the “how” of achieving Zero Carbon 2030 with community engagement:  Work Streams are Buildings, housing, and infrastructure; Sustainable and affordable energy; Green Economy; and  Engaging, Empowering and Partnering and Finance and Investments.

Delivering zero carbon 2030 poses a range of complex and interlinked challenges and projects must be delivered in large numbers and at scale to make a step change in carbon emissions.  CEGs will need good data on available sites, information on the Council’s priorities, and platforms for collaboration so insights and learning can be shared and replicated. A prioritisation decision tool would enable the Council to segment and categorise their building stock.  This tool should also enable site prioritisation and selection to identify which sites are suitable for decarbonisation and in what order the measures should be installed.

Behaviour change has a vitally important role in carbon reduction and the report focuses on public awareness and information campaigns, demonstration projects that can offer practical and implementable solutions, festivals, friendly competitions between neighbourhoods and repair workshops.
On finance the report looks at community share offers, green bonds and partnerships with the council and community organisations. 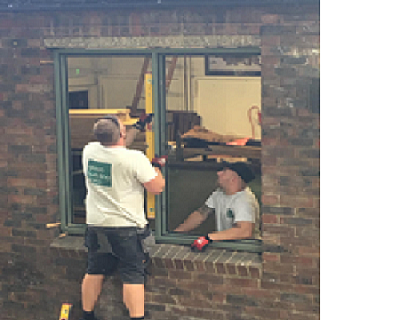 PUNL is currently working on a renewable heat project with Caxton House.

In July 2021 PUNL commissioned a decarbonisation feasibility study at Caxton House funded by the London Community Energy Fund (LCEF4). Its primary purpose was to examine the technical options for installing renewable heat solutions at this site to reduce carbon emissions and improve air quality.  PUNL also commissioned Energy Systems Catapult (ESC) to work with them to develop a financial model for funding the chosen solution.

Caxton House’s energy efficiency was reviewed, and the decision made to replace all their existing windows.  PUNL raised most of the capital through an LCEF4 capital grant that was supplemented by additional funding raised by Caxton House.   High performance triple glazed windows have now been installed throughout the Centre to reduce draughts and improve ventilation.

The window replacement work has also precipitated other actions to improve energy efficiency in the building including replacing fire exit doors and skylights.   The next step is to raise funding to install a building management system that will enable room-level control of heating and a mechanical ventilation and heat recovery system that will improve air flow.  Work with ESC on developing the business and financial model is clarifying available options for PUNL to get involved in supplying renewable heat to the Centre either through a Heat Contract or by setting up an Energy Services Company.  This work is on-going.

The energy efficiency measures and heat decarbonisation project when fully implemented will cost a further £250-£300K and will save c26t/carbon a year.  Caxton House is projected to achieve running cost savings of £1.1k every year.

If c7,000 buildings were similarly decarbonised, then the carbon saving would equate to the estimated 170kT of annual residential gas emissions.

In October PUNL ran an event at Caxton House in Islington: You have the Power! Learn to shrink your energy bills, save ££s & carbon, where certificates were handed out to participants in the Energy Champion programme.

A ‘one to one’ energy saving session

Earlier in the summer, PUNL ran an intensive online programme over three weeks, organised by Tanuja Pandit and led by an experienced trainer.  Ten members of the community volunteered for the Energy Champion programme and learnt how to help people to: reduce their energy bills by switching suppliers and /or by accessing the best tariffs; take advantage of available discounts e.g., Warm Homes discount and services, e.g., Islington’s Shine service; and tackle fuel bill arrears while ensuring they reduce heat loss and optimise energy use in their homes.

Subsequently PUNL partnered with Caxton House to run two face-to-face workshops with people from the local community followed by 1-to-1 energy advice sessions attended by 8 were residents and two Shine employees.

PUNL is planning to partner with Caxton House to apply for a larger grant to reach and support more vulnerable people.

The refurbished ‘Secret Garden’ between Balmore and Doynton Streets N19 was launched on Saturday 23 October and attended by children and staff from Brookfield School, residents from nearby streets and representatives from community groups.

Community Interest Company, Wood That Works made raised beds, benches and chairs and other furniture ahead of it being used by Brookfield Primary School staff and pupils as an outdoors learning centre and growing space. It will be used as part of the curriculum and to help pupils learn about pond life and growing – with a focus on saving energy, recycling, and biodiversity. The site is also accessible to residents, (many without gardens) at certain times.

The project was supported by a grant from Power Up North London Community Energy Fund – following its earlier funding for the Feminist Orchard at Parliament Hill Girls’ School.

Director of Wood That Works, Ricky Jefferson said all the wood used is recycled and cleared of any rough edges or nails. Besides up-cycling Jefferson described cross-cycling, taking part of an old piece of furniture, and adding a new bit for strength and stability.

Wood That Works provide classes to schools, children with learning difficulties, women’s groups and young offenders and Jefferson proudly brought in a bird box made by the latter undertaking community reparation.

Fellow director Honey Halit said the organisation helps re-educate women in basic DIY-skills and builds confidence and empowerment. She explained women aren’t traditionally associated with DIY skills, or putting up shelving, but there needs to be a re-education.

The first PUNL Community Energy Fund project came to fruition at the beginning of May when pupils from Parliament Hill School planted a “feminist orchard”.

Thirty students from Years 7 to 9 helped plant 11 fruit trees in a circle, laid wildflower turf and dug a pond.

The names of the trees will be submitted by pupils and decided on by the school’s climate action group.

PUNL set up the Community Energy Fund in 2020. It uses surplus funds from the business activity of Power Up North London to encourage and support community action in reducing carbon in our atmosphere. The fund is administered by a committee formed of PUNL shareholders and members of our board of directors.

PUNL has been awarded several grants from the London Community Energy Fund to enable energy efficiency and carbon savings on two important projects in Islington.

The Caxton House project aims to reduce carbon emissions from space and water heating for the community centre by installing an air or ground source heat pump. The heat pump will reduce carbon emissions by c80% and gas consumption from the grid (for heating and hot water) by 100%. The heat pump will deliver estimated net carbon savings of 21t – 23t a year. The grant is for £50,000. In parallel PUNL is working with Caxton House to improve energy efficiency by replacing windows, fixing draughts in doors, and upgrading the building management system. The work complements the former and is for £13,400.

The Paradise Park children’s centre project is for LED lights to achieve financial and carbon savings. The lower electricity consumption will help reduce electricity costs by c30 – 40% and the savings will be used to improve service provision. It is estimated the project would save £1,256 annually in running costs. The grant is for £2,252.

PUNL was one of the supporters of the Camden Future Journal 2030 initiative, where an editorial board asked for contributions on what a green and clean Camden would look like in 2030.

The team was given four pages (front cover, see pic, and inside, along with back and inside back).

It received 350 entries, including several on renewables and zero carbon initiatives which are published here.

Two groups are forming to take forward initiatives arising from the ideas submitted – Roll Out and Projects.

There is also an interview on PUNL’s Energy Community Fund and PUNL’s first project here.

PUNL has just submitted four proposals to the London Community Energy Fund (LCEF4) for funding to undertake a range of energy efficiency and renewable heat projects.

Two of the four proposals were in PUNL’s name and two were on behalf of community organisations.  We will update you on our progress as soon as we hear the outcome of our applications.